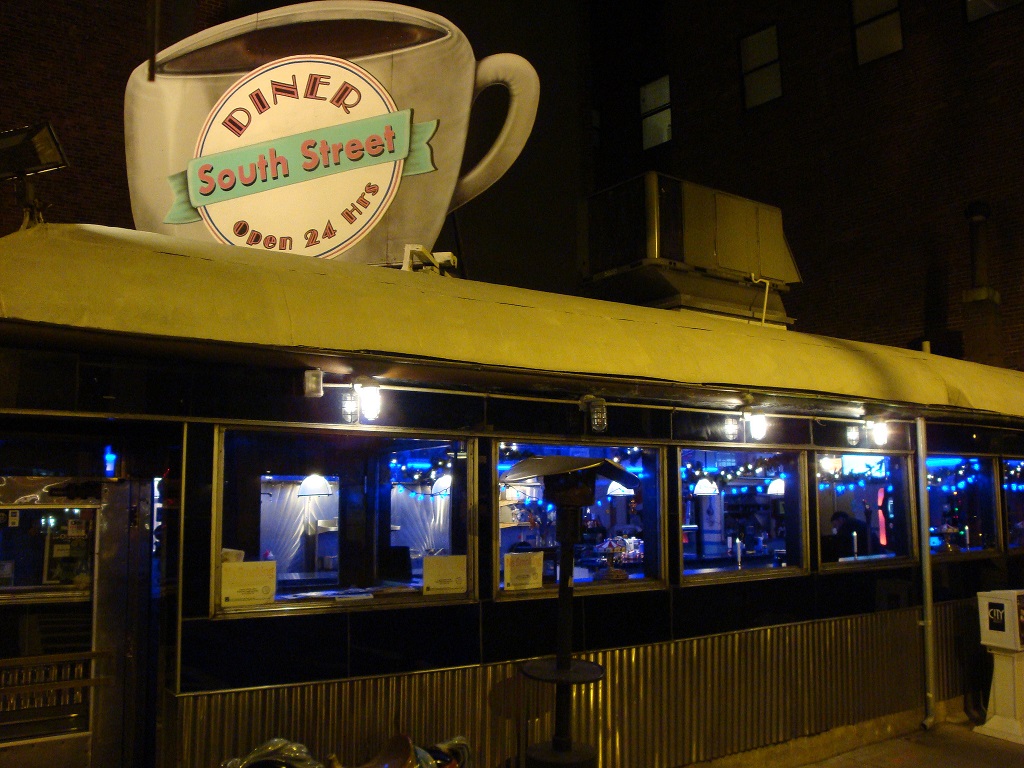 Whether you’re burning the midnight oil, had a few too many Sam Adams or just plain hungry at 3am, we won’t  judge the reason(s) you’re seeking a 24-hour restaurant in Boston. Although late-night dining in Beantown can be hard to come by, it does exist – and it’s some of the best food the city has to offer. You’d be surprised by the cravings you can quash at odd hours of the night, from donuts to ramen to fish and chips. Here are six tasty 24-hour restaurants in Boston.

You know when you’re hungry late at night – or early in the morning, depending on how you look at it – but not sure if you want breakfast or dinner? At South Street Diner, you can have either at any time of day. No matter what meal you’re ordering, the tiny corner eatery serves comfort food 24/7, like gravy cheese fries, chicken fingers, banana bread and a whopping 15 varieties of eggs Benedict. “An egg is an egg is an egg. What we do is add in the fun,” says Sol Sidell, South Street Diner’s owner and operator.

Believe it or not, the restaurant is also a hot spot for local movie stars, sports heroes and musicians. We can’t guarantee you’ll see one at 4am, but Sol says it’s a rare night that the establishment doesn’t see a celebrity or two.

Is your sweet tooth also a night owl? Head to Bova’s Bakery in the North End for Italian breads, cookies and pastries at any hour. You’ll find whatever carbs you crave, from Italian classics like biscotti, tiramisu, cannoli and sfogliatelle to familiar favorites like whoopie pies, cream puffs and turnovers. For the more savory-inclined, Bova’s also sells calzones, subs, pizzas and their specialty: arancini.

Clover’s food trucks and restaurants have spread like mad throughout Boston and Cambridge since the company’s founding in 2008 by two local students. This location in Central Square is also the first and only around-the-clock restaurant in Cambridge. It’s some of the healthiest late-night eats you’ll find in the Boston area, with several vegan and vegetarian options on the largely plant-based, internationally-inspired menu. Try a meatball sandwich using Impossible™ meat substitute, a pepper and egg breakfast sandwich using JUST™ egg substitute, or a BLT with smoky tempeh that pleased even Boston’s longest-serving mayor, Thomas Menino.

Whether you spell it doughnut or donut, the sugary, caloric treat just tastes better during the wee hours – especially at Boston’s favorite and only 24-hour donut shop. You’ll find a wide and unique selection of donuts, including varieties like honey dip, Boston cream, Fruity Pebbles, maple bacon, jelly, powdered, butternut and more. The regular glazed donut and any of the cereal donuts come highly recommended, as does the maple bacon, which is made to order so the bacon is always crispy. They also serve breakfast sandwiches around the clock, with specialty ingredients like Linguiça sausage. Their drive-thru is open all night too!

Although this 70-year-old South End diner went through an ownership change in 2011, new owners Damian and Sheree Marciante have preserved the original name and old school Art Deco look of the establishment. Elements like neon signs, a black-and-white checkered floor, a jukebox, leather booths and counter stools give the space a true diner feel. It’s open 24 hours on Thursdays, Fridays and Saturdays, when you can order breakfast, lunch or dinner all day and night.

Wholesome Fresh may look like your average convenience store, albeit one with a hot entrée and salad bar open until midnight. However, Wholesome Fresh’s best-kept secret is their 24-hour deli, which offers made-to-order ramen, poke bowls and sandwiches. Who could pass up these comforting foods after a late night of working, studying or exploring Harvard Square?

Traveling to Boston or Cambridge soon and looking for a home base? Search our furnished apartments and create an authentic residential experience.